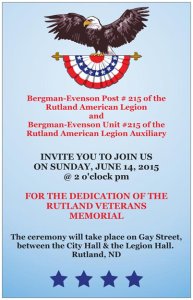 Click on the invitation for further information.  Pictures of the Rutland Veterans Memorial can be seen at lower right of the page.  Click on the photos to view them.

The Rutland Veterans Memorial pyramid was placed on site on Thursday, July 3, 2014.  It made it to the location just before the Rutland All-School Reunion over the Fourth of July holiday weekend.

The Rutland Veterans Memorial project began in 2012 with the formation of a committee comprised of members of the Rutland American Legion Post No. 115 and members of the Rutland American Legion Auxiliary. The Committee, comprised of Co-Chairs Deborah Banish and Ted Lee, also included Bill Anderson, Carolyn Christensen, Sonja Christensen, and Joan Lee.  The Committee, and members of the Post and Auxiliary, held several fundraisers – pancake breakfasts, bake sales, pie and ice cream socials – and solicited contributions from local businesses.  Concrete was poured in August 2013 after being delayed by scattered showers.  The electricity for the steel column and the lighting, along with the flag poles were already in place with the concrete.

The current pyramid with names of hundreds of Rutland area service men and women still needs a few finishing touches and some landscaping before the project will be completed. There will always be upkeep and maintenance needs and a few names to add as time goes by so there will be a few more fundraising events to help with that important aspect of the project.

The Rutland American Legion Post #215 and the Legion Auxiliary have been working on a project to honor Rutland’s home-town heroes. A joint committee was formed to plan a veteran’s memorial to be erected in Rutland.  The Legion and Auxiliary have been working on several small fundraisers for nearly two years and have already received more than $6,000 in contributions.  The fundraisers have included bake sales, pancake breakfasts, raffles and a pie and ice cream social at Rutland’s Ribfest.  They are currently selling tickets for a quilt raffle and in June will be coordinating the food for the Relay for Life Tractor Drive and also for a private auction.

The first phase of the Veterans Memorial project is estimated at about $12,000.  The project, located between the City Hall and American Legion Building, will begin with the cement base and a pyramid tower nearly 16′ tall with names of area veterans.  The project is set to begin this summer while the group continues to raise funds.

If you are interested in contributing toward this project, please send contributions to Joan Lee, American Legion Auxiliary President, at 9829 143rd Avenue Southeast, Cayuga, ND 58013.  Names of veterans are being compiled but if you have a name to be included, please let Joan know.  The group does not want anyone to be excluded.

We will have future posts with the proposed sketch and related information as this wonderful project comes to fruition.

If you want to hear first hand about the project, be sure to attend the Memorial Day Program in Rutland on May 27, 2013.

On Friday, November 11, the American Legion Auxiliary held its annual soup and supper meal for the Rutland area Veterans and their spouses.   Auxiliary members provided a fine selection of soups, sandwiches and desserts.  Following the meal the Auxiliary provided a short program including readings, stories and information of the Pocket Flag program.  Following the meal and Auxiliary program, attending Veteran’s provided stories of humorous events during their boot camp or service years.

At 11:11 a.m., Nov. 11, 1918, the guns fell silent on the “Western Front,” and World War I, the war that had been called “The Great War” and “The War to End All Wars,” was over. More than 2 million American soldiers served in France during the fierce fighting that broke the German Army’s will to continue the war. This year, at 11:11 a.m. on the 11th day of the 11th month of the 11th year of the 21st century, for the first time since 1918, there will be no American Veteran of the vast American Army that won the war in France to observe the anniversary of the end of that conflict. The last American veteran of World War I died this year, joining ranks with the millions of his comrades who exist only in memory and history.

That generation had served their country in peace as well as in war. They were builders as well as warriors. Among the structures for which they laid the foundations and commenced construction were the Veterans Administration and the veterans’ health care system, intended to fulfill the nation’s promises to those who had answered the call of duty and borne the burdens of battle. The foundations laid by the veterans of World War I were expanded and strengthened a generation later, when President Franklin D. Roosevelt proposed, and Congress adopted, the GI Bill of Rights of 1944, providing health care and disability benefits for returning veterans of World War II and, as important, educational benefits that gave America a generation of skilled workers, teachers, administrators and executives who led this nation to a half century of unprecedented progress and prosperity.

Veterans Day, we should remember, is not a day to honor America’s dead, but a day to honor the living. It is a day set aside to honor those who have dedicated a portion of their lives to service in our nation’s military, and have gone on to continue their service to community, state and nation as productive citizens.

Today, more than 20 million of our fellow Americans are military veterans. Two million of those are veterans of the current military missions in Iraq and Afghanistan. The foundations laid, and the institutions built, by them and their predecessors continue to deliver on America’s promises to those who go in harm’s way for their country. Three years ago, the Congress adopted the GI Bill of Rights, the most comprehensive package of rights and benefits for America’s military veterans since the original GI Bill of Rights of 1944, containing educational incentives as well as medical, disability and rehabilitation benefits for veterans.

There are those in Congress today who would renege on America’s commitment to veterans.

As Americans, our commitment to this nation’s veterans must be as unquestionable, as unshakable, as unswerving as their courage in battle. We must continue to build on the foundations laid by those who forced the guns to fall silent on Nov. 11, 1918, so that we might hear the blessed song of peace. So, on this Veterans Day, Nov. 11, 2011, let us commit ourselves to continue the work they have begun, to build a nation that honors the sacrifice and service of those who have worn the uniform of our military services. To America’s veterans on this Veterans Day I say, “Thank you for your service, and welcome home!” Together, we will continue to build a better, stronger America.

Those of us who are still breathing cannot repay the sacrifice made by those who fought for our freedom and who died in service to our country, but at the very least we must and can remember them. That’s exactly what Rutland did as part of its annual Memorial Day event. This year, the American Legion Bergman Evenson Post 215 held events at both the Nordland Lutheran Church cemetary and the Rutland Cemetary. Following visits to the cemetaries, more than 200 residents and visitors proceeded to City Hall for a short program. American Legion Members received member service awards:  Donald Donaldson and Milton McLaen received their 65 year awards, Norm Preble and Roger Nelson received 45 year member awards, and Andy Hoflen received the forty year member service award. Women’s Auxiliary President Sonja Christensen gave a thought-provoking speech. Musical entertainment included patriotic songs sung by local talent accompanied by Kathleen Brakke. Following the program a wonderful meal of scalloped potatoes and ham and a variety of salads and desserts was served.

Photos from the day’s activities have been posted on the Rutland, ND Facebook page.